Voting With My Dollars

20 years ago was the first time my mind piloted me in the direction of conscious consumerism also known as voting with my money.

I was a freshly-hired engineer, single with loads of disposable income. I was finally able to spend on  the frivolous things I loved and foreign magazines fell under that category. Up until then, the only time I got to read magazines was when I was at the hair dressers' and the magazines were usually a few editions behind. Once I had my own money, I subscribed to a magazine delivery service that got me copies of Glamour, InStyle, Essence and Ebony magazines promptly delivered to my desk in Port Harcourt. Magazine day was always a happy day for me until one day, it wasn't.

That day, I had received and quickly devoured my copies of InStyle and Glamour magazine when an unfamiliar feeling of discontent stole over me. I realized that reading the magazines actually left me feeling very unhappy. All the hair and beauty tips did not apply to me AT ALL. It shook me to know that though I spent my hard-earned money on those magazines, I was not their target audience and they did not care about me enough to include content that was applicable to my type of hair or skin tome. It was that moment that I first embraced the concept of voting with my naira/dollars. If the magazine publishers did not cater to me, then I shouldn't enrich their pockets with my money. So I cancelled my subscriptions to InStyle and Glamour and have never spent a dime on those magazines since then. 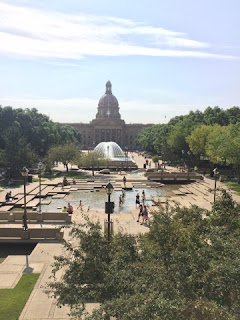 In a capitalist country like Canada, cash is king. The businesses that can generate cash survive, the ones that can't will eventually die off. My cash is king and it's my voting power. My purchasing plan and strategy rewards business that I'm aligned with. Here are 3 ways I vote with my dollars these days:

Mobile video games: I'm a bit of a closet gamer and have been hooked on several mobile games over the last few years. Know what I hate? Game developers who are so cash-hungry that they throw ads everywhere and ruin the gaming experience. When I find a game where the advertisements and other revenue generating actions are done tastefully, I reward them by spending some cash ingame. After all, they need to pay salaries to the people who are thoughtfully making improvements to the game. My mobile gaming budget is $10 a month which I rotate between my faves.

Charities: I choose to support Calgary focused charities that are making a visible impact on my home city versus the bigger national charities.

Local food: I sometimes pay a premium to support the local food businesses. Opportunities to do this present themselves in different ways.

With the recent state of affairs, we're seeing a new focus on businesses and how they truly address issues of diversity and inclusion. My plan going forward is to (as much as possible) withdraw support from businesses who do not practice diversity/inclusion and support businesses that do even if that decision comes with a slightly higher price tag.

Who: Nigerian-born Canadian
Where: Calgary
What I blog about: Financial Planning
Why: To share what I learned the hard way as an immigrant
When: New post every Monday